Bruce Campbell is making his inaugural visit to filmmaker Adam Green and Joe Lynch’s podcast, The Movie Crypt on Dec. 10 to kick off the sixth annual Yorkiethon which benefits Save a Yorkie Rescue. As fans of the Hatchet franchise and Holliston know, creator Green is the proud owner of a Yorkshire Terrier named Arwen (who even has her own Twitter feed).

A labor of love for the director, through the years, his 48-hour marathon has raised quite a bit of money for this awesome canine charity. In addition to hosting the iconic Evil Dead actor, Casey Tebo will also be along for the ride as the duo promote their hilarious holiday horror film, Black Friday which is currently in theaters and VOD.

For those readers that aren’t familiar with this event, each year, Green and Lynch assemble over 75 guests to participate in Yorkiethon which helps to give abandoned and abused dogs another chance. Tons of entertainment is packed into the two-day fest including live comedy, interviews, script readings, film commentaries and a plethora of other activities.

One of the most popular segments of the production is Arwen’s Silent Auction. This is where friends of the podcast (known affectionately as Crypt Keepers) donate various items to the cause. In the past, movie props have been featured along with Slash’s top hat, rare Star Wars memorabilia, Victor Crowley Teddy Bears, horror themed jewelry and so much more!

If you have anything that you would like to donate to the auction, email MovieCrypt@Hotmail.com with details of the items and pictures. For specific instructions and submission rules, visit The Movie Crypt’s Patreon site at this link.

ArieScope Pictures will be presenting Yorkiethon 6 from Dec. 10 to Dec. 12 for free. Follow hosts Adam Green and Joe Lynch on Twitter for updates closer to the event. 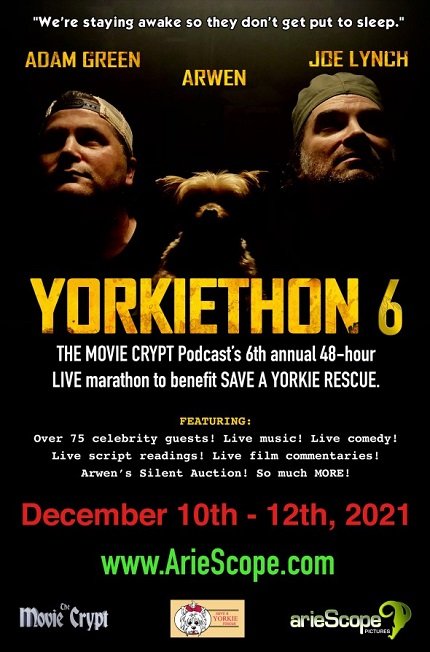