Bruce Campbell Teases His Next Novel, House Divided on Twitter

In addition to being a prolific actor, screenwriter, director and producer, Bruce Campbell is also a published author with three New York Times Bestsellers under his belt. Last year, he announced that he formed Eastmoor Media, a publishing company that would release his books, movies, TV shows and any other creative endeavors that the thespian might undertake.

Today on Twitter, Campbell dropped a tease about his upcoming novel, House Divided. Interestingly enough, this venture started out as a script.

The comedy was meant to be a vehicle for Bruce and his pal, Ted Raimi. According to an interview last year in 1428 Elm, the entertainment veteran noted:

“It’s a harder sell. There’s no blood. It’s not a horror movie. It’s a political satire. Associating me with political satire isn’t the first thing investors whip out their checkbooks for.”

So, instead of letting his project lie dormant, Campbell decided that he would turn his screenplay into a book. He intends on releasing it through his media company in the near future.

House Divided tells the story of two polar opposite candidates (think Sean Hannity and poet Allen Ginsberg) that are running for county commissioner. The duo embarks on a Boy Scout challenge to spend a weekend together in the Oregon wilderness.

Of course, they would be forced to rely upon one another to survive and with their combined knowledge, they should become better personalities and more adept at serving their respective communities. However, that is not what happens and everything goes to hell in a hand basket.

While we wish that this would become a feature, in Bruce Campbell’s capable hands, this will be one hell of a read! We can’t wait for it to be released.

Hopefully, in addition to an electronic version of House Divided, we have our fingers crossed that he intends to make a print and audio version available as well. Stay tuned for more information! 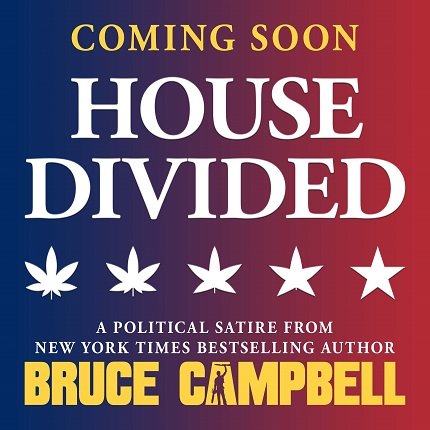