Even though Ash vs Evil Dead has been off the air for three years, fans still clamor for news about the Ghostbeaters. From 2015 until 2018, comedy-horror aficionados fell in love with Ash Williams’ sidekicks, Pablo Simon Bolivar and Kelly Maxwell portrayed by Ray Santiago and Dana DeLorenzo.

Since the cancellation of the cult favorite show on STARZ, Ray Santiago has been a busy actor. He immediately jumped into the Blumhouse anthology series, Into the Dark with a role in The Body in October 2018. 2019 saw the thespian appearing in two features, Tone-Deaf with a terrifying Robert Patrick and the romantic time traveling comedy, Speed of Life where he played Ann Dowd’s character, June’s lover.

Right before the pandemic hit last year, Santiago did a two-episode stint on the CBS All Access true crime show, Interrogation with Peter Sarsgaard. Ray is still involved in the Evil Dead universe with his reprisal of sweet Pablito in the upcoming Evil Dead: The Game which will be released in February 2022.

It is clear that he is firmly entrenched in the horror genre. On a recent appearance on the popular culture podcast, Zenescope Entertainment, the performer admitted that he grew up watching the Halloween franchise as well as being a huge admirer of Sarah Michelle Gellar’s Buffy the Vampire Slayer. So, we were pleasantly surprised to learn of his love for Wes Craven’s A Nightmare on Elm Street.

As a kid, he even called the special 900 number (900-860-4-Fred) just so he could listen to Robert Englund’s alter ego, Freddy Krueger. Santiago is so enamored with Craven’s world that he would “kill” to be in a reboot of the series.

In 2019, the franchise made the news again when the director’s estate was rumored to be taking pitches to bring the deadly razor gloved murderer back to life. Then Elijah Wood revealed that he wanted to throw his hat into the ring with a proposal to revive the Nightmare King. At one point, The Conjuring 2’s scribe, Leslie Johnson-McGoldrick was attached to write the film. Even Doctor Sleep director, Mike Flanagan wanted in on the action.

At present, nothing seems to be happening on that front. However, if Craven’s estate ever gets around to resuscitating Freddy, we hope they give Ray Santiago a call! In the meantime, look for the actor in the upcoming Jamie Foxx horror-comedy, Day Shift on Netflix and he will also be appearing on Season 4 of Shudder's The Boulet Brothers Dragula on Oct. 19. 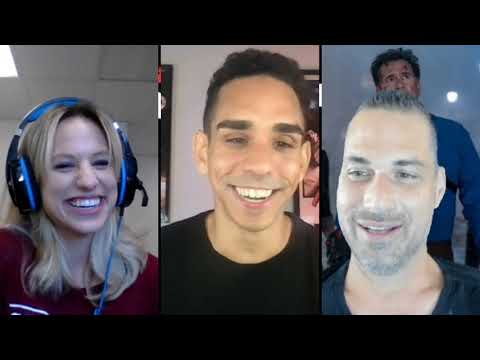