Be Kind Rewind: Spreading the Fires of Creativity

Be Kind Rewind is the kind of off-the-wall comedy that could only come from the mind of French filmmaker Michel Gondry. It’s a somewhat bittersweet tale about the perils of resisting change that’s brimming with love of cinema. It’s funny, quirky and a little bit sad.

It’s also a terrific rendering of the way that creativity can grow from a spark in one person’s brain into a raging fire that can engulf a whole community.

Be Kind introduces us to Mike (Mos Def), an employee at Be Kind Rewind video store, and his troublemaking buddy, Jerry (Jack Black). When Jerry accidentally erases all the video cassettes in the store, he and Mike need to come up with a way to stay in business, settling on the idea of shooting their own shortened, no-budget version of the videos in their inventory.

Mike and Jerry’s remakes become big hits and soon, they’re remaking dozens of movies and enlisting the help of everyone in town to do it. As buzz about their movies spreads, so does the love of filmmaking, ensnaring almost everyone in the community and Jerry and Mike become local celebrities.

Be Kind is actually a pretty good rendering of how creativity can grow and infect people from all walks of life with the love of doing art. It starts small, a seed of an idea in the mind of a single person. That person decides to do something with that idea, to develop it and try to bring the original idea to fruition.

But those involved in the creative process can rarely keep it to themselves. They tell anyone who will listen. They reach out, searching for those who might share their vision, or who are at least willing to help them achieve it. As they speak, some of the people around them respond by tearing them down. They say “So-and-so is crazy! They can’t do what they say they’re gonna do. Besides, what’s the point. It’s not like they’ll get famous or make any money.”

But the creative types aren’t looking for those losers. They’re looking for those who get excited hearing about what they’re trying to do. Hearing someone else who is so on fire with creativity prompts them to start kicking around ideas in their own brains. Eventually, they may even strike out on their own adventures, chasing their muses and laboring to turn the ideas in their heads into some sort of reality, whether it be literature, film, podcasts or a million other things.

I’ve seen this process play out many times. I used to be part of a writers group. We’d get together on a monthly basis to talk about writing and throw ideas back and forth. There would always be a point where one writer would be talking about his or her work-in-progress with such passion and excitement, the writers around them would be carried along in the energy. Soon, the group would be throwing out ideas or excitedly conversing about stories that just popped into their heads or new ideas they were going to get to work on.

Be Kind also captures the end of the creative process, where everyone involved has given what they could give and the only thing left to do is kick back and experience some new art. The film ends with a screening of the Fats Waller “biopic” Jerry, Mike and the entire neighborhood have been involved in making. Everyone gets to see their shining moment up on screen and it’s clear that working on this film has pulled everyone together and turned them from a bunch of neighbors into a family.

It’s a bittersweet victory, as Be Kind Rewind Video is still shut down, but in that bitter moment, Mike, Jerry and everyone who worked on the film get to bask in the glow of a piece of art they all contributed to. For a moment, it’s okay that the community is losing the store because it gave them one last gifting. It let them be a part of the miracle that is creating a piece of art. 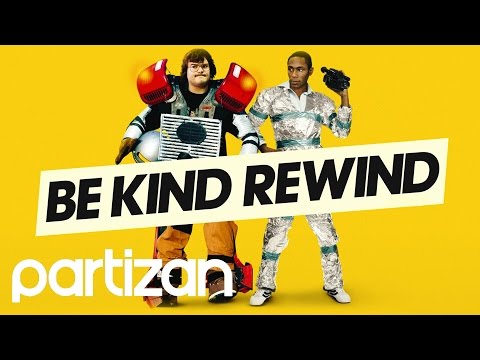 Be Kind Rewind Mos Def Jack Black Michel Gondry
Could Clancy Brown Give the Dexter Revival the Boost It Needs?
Stuck in the Past: Movies are Comfort Food for the Soul
We Need to Talk about Bryan Cranston…
Comments