One aspect of Paul Verhoeven’s action masterpiece, RoboCop, that doesn’t get as much attention as it should is its main adversary, the fiendish and brutal Clarence Boddicker. Portrayed by Kurtwood Smith (best known as the dad from That 70’s Show who’s always got a foot free to plant in some kid’s ass, Red Foreman), Boddicker is a fantastic villain that deserves to be mentioned as one of the greatest antagonists in the history of film. I’m taking this opportunity to throw a little appreciation Clarence’s way because, by my reckoning, he’s one of cinema’s most underrated antiheroes.

When you break down the qualities that make for a great movie villain, it’s pretty clear that Boddicker checks every single box. Let’s do the list.

A great movie villain needs an iconic introduction. We meet Clarence in a memorable scene in the back of a van with his team of criminals. One of his underlings has made a boo-boo and burnt their stolen money, rendering it useless. On top of that, they now have the cops on their tails.

Frustrated by his minion’s screw-up and needing a way to put some distance between himself and law enforcement, Boddicker grabs his now-injured subordinate and asks “Can you fly, Bobby?” With that, he tosses the wounded man at the pursuing cops.

After that incident, we get to see how Clarence runs his gang. We also catch a glimpse at how vicious; cutthroat and darkly witty he is. It’s a great scene and the perfect way to bring his character into the story. 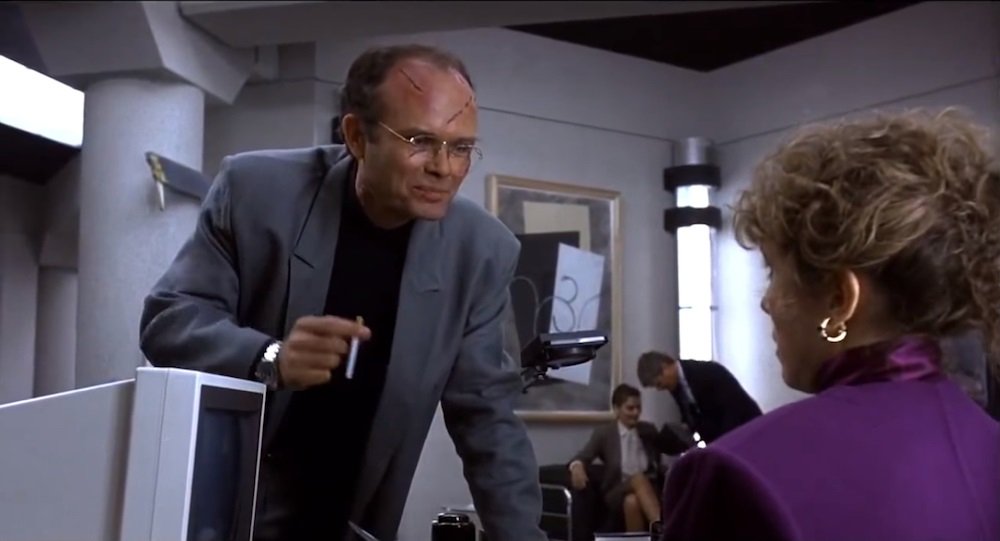 A great movie villain needs to have some style. Darth Vader has his gleaming space samurai armor. Hans Gruber is a slick, intelligent thief in a designer suit. No matter the time period, movie villains have something that visually sets them apart from the rank-and-file baddies around them.

With his glasses and monochromatic clothing, Clarence could pass for Mad Max’s accountant. He stands out among the burly guys in his crew and the corporate scumbags at Omni Consumer Products. That goes a long way towards making Clarence the RoboCop bad guy you remember the most.

A great movie villain should deliver dialogue with some attitude. The actor playing a villain is the key to making that villain work and the way they deliver dialogue helps to define how that villain feels about the world. For Clarence Boddicker, it’s a heavy dose of spite occasionally spiked with some dark humor. It’s there in the way he asks Bobby if he can fly. It’s there in his interactions with his boss, Dick Jones, as they scheme to financially exploit OCP’s planned Delta City project.

It’s especially there in the disdain-dripping way he demands his phone call when RoboCop brings him in to be booked into jail. A glare that bleeds “Up yours,” the spitting of some blood onto the police chief’s desk and the arrogant way he orders the cops to let him use the phone tell you not only how he views the situation he’s in, but also the police officers around him. He’s smug, angry and he isn’t about to put up with anyone else’s bullshit. 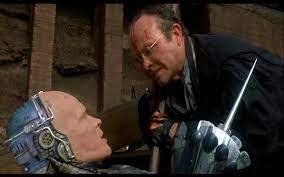 Finally, a great movie villain needs to be connected to and mirror the hero. Movies work best when there’s something that ties the hero and the villain together but way too many films do a poor job of establishing this link. RoboCop does a great job at doing so by having Boddicker fire the final shot that turns Murphy, a regular cop, into a nearly-indestructible cyborg. In that way, Boddicker actually creates the thing that will eventually destroy him.

But there’s a little more there because both RoboCop and Boddicker are inhuman monsters and each one’s strengths take advantage of the other’s weaknesses. RoboCop is physically strong and operates by a strict set of rules. Boddicker makes up for his lack of muscle by being willing to do whatever he needs to, no matter what implicit or explicit rules he breaks. In the end, Boddicker tries to finish RoboCop off with brute strength and it leads to his demise.

True, Clarence is just a henchman to Dick Jones, the movie’s ultimate bad guy. But Jones is just a corrupt rich dude in a suit and those types are a dime a dozen in movies. Boddicker stands out as the dude who has his own style, has a truckload of attitude and complements the movie’s hero. He may not be celebrated in the same way as The Joker or Hannibal Lecter are but he deserves a lot more recognition than he gets.

RoboCop Clarence Boddicker Paul Verhoeven Kurtwood Smith
Could Clancy Brown Give the Dexter Revival the Boost It Needs?
Stuck in the Past: Movies are Comfort Food for the Soul
We Need to Talk about Bryan Cranston…
Comments