Kicking in the Door: The Most Memorable Jason Statham Action Scene

By the end of the first act of The Transporter, Frank Martin (Jason Statham) has had a pretty rotten day. He was hired to do a job but it didn’t go too smoothly. He manages his work by a set of simple rules, which he broke. It all leads to a punk criminal named Wall Street (Matt Schulze) trying to incinerate Frank’s beautiful BMW 735i with Frank still in it. Obviously, this is a double-cross that can’t go unaddressed. You can’t attempt to explode a normal Joe without expecting some blowback and with his background and training, Frank is far from a normal Joe. Cue the most memorable action scene in Jason Statham’s entire career.

Wall Street’s henchmen are sitting around a table, playing cards and having a merry old time until the doorbell unexpectedly rings. The thug who’s standing lookout peeps through the peephole just in time to see Frank leaping right at him. He kicks open the door then proceeds to beat the baguettes out of everyone in sight. I can say “beat the baguettes out of everyone,” can’t I? I mean, they are in France… 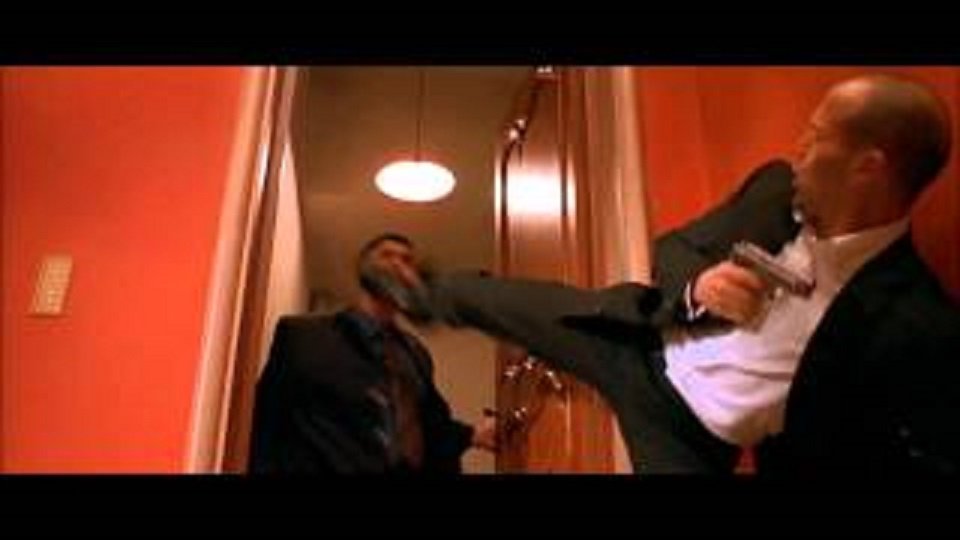 Why This Scene Sticks:

Statham has made a whole bunch of movies, many of them action films. He was part of The Fast & the Furious, one of the biggest movie franchises in the world. He tangled with a giant shark in The Meg and was a vital part of Sly Stallone’s action hero boy band in The Expendables. So, why does this short scene from a modestly successful film that came at the first of Statham’s career stick out so much? Why, when there’s so much else to choose from, does my brain go straight to this scene whenever his name comes up?

Let me attempt to answer.

First off, the scene includes a fight in a hallway. Hallway fights, whether in Oldboy or the Daredevil Netflix series or whatever, have a pretty high cool factor. You get to see the hero’s ability to improvise and fight his way out when he’s caught in a confined space and his escape is cut off.

Not only that, but the Transporter scene is also a nice bit of foreshadowing, seeing as how a number of fights in the third act take place in confined spaces, either in-between cargo containers or inside a bus. This being the first time we see Frank fighting under those conditions, we know to expect something pretty badass when he finds himself in similar situations later in the film. 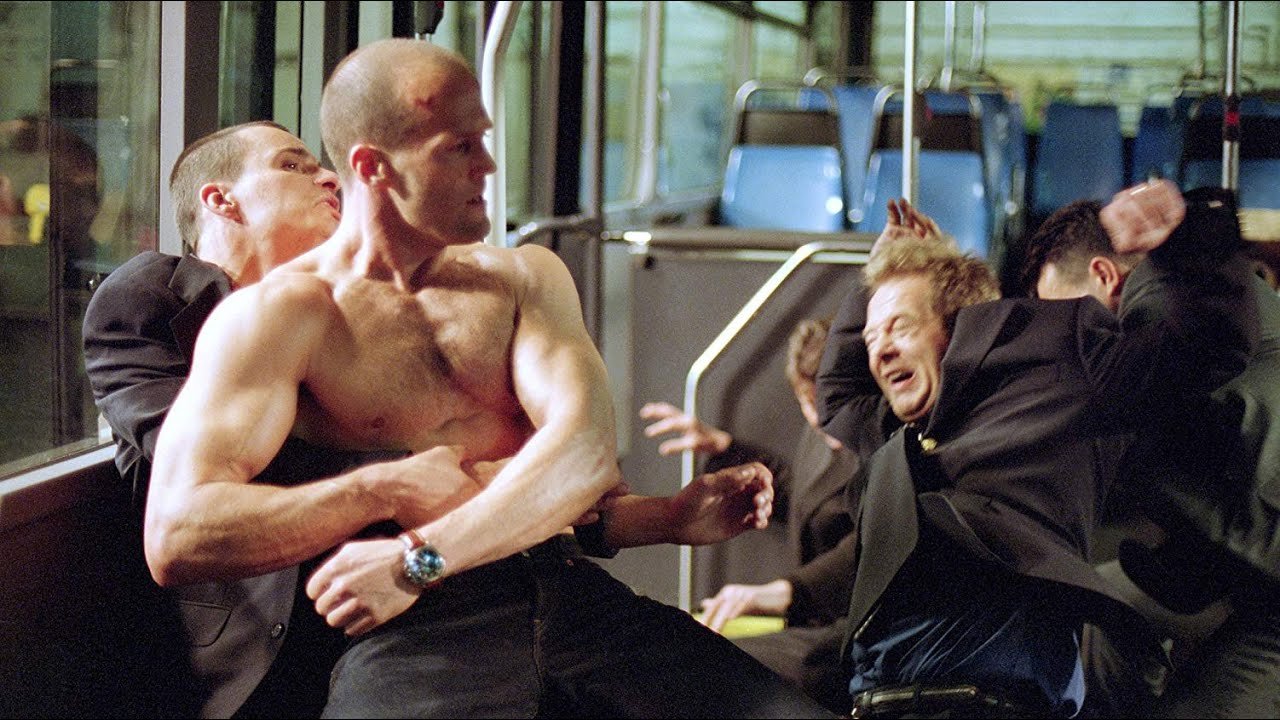 I also think it sticks out so much because it doesn’t overstay its welcome. The entire scene runs less than three minutes and, in that time, we see Frank use guns, a wall-mounted candlestick, his fists and feet as weapons. We get to see how proficient he is with multiple weapons, but the scene doesn’t lose us in an interminable sequence full of punches and kicks. It’s short, sweet and because of that, it sticks in the brain.

But if I had to pick one reason why this scene is so damn memorable, I’d say because of how it starts. Frank announces his presence to the whole house, smashes through the front door like the Incredible Hulk and thrashes every person in sight. Forget stealth. Forget having a well-thought-out plan. Frank’s gonna beat down every bad guy in that house but he’s also gonna be polite enough to ring the doorbell so they know he’s there. It’s the perfect amount of ridiculousness.

Jason Statham has had plenty of highlights over the course of his career. I plan on writing about one or two of them at some point down the road. But this scene from The Transporter encapsulates everything there is to love about Statham as an action star. If I had a career highlight this cool, I’d want it playing above my headstone in a holographic loop for eternity. 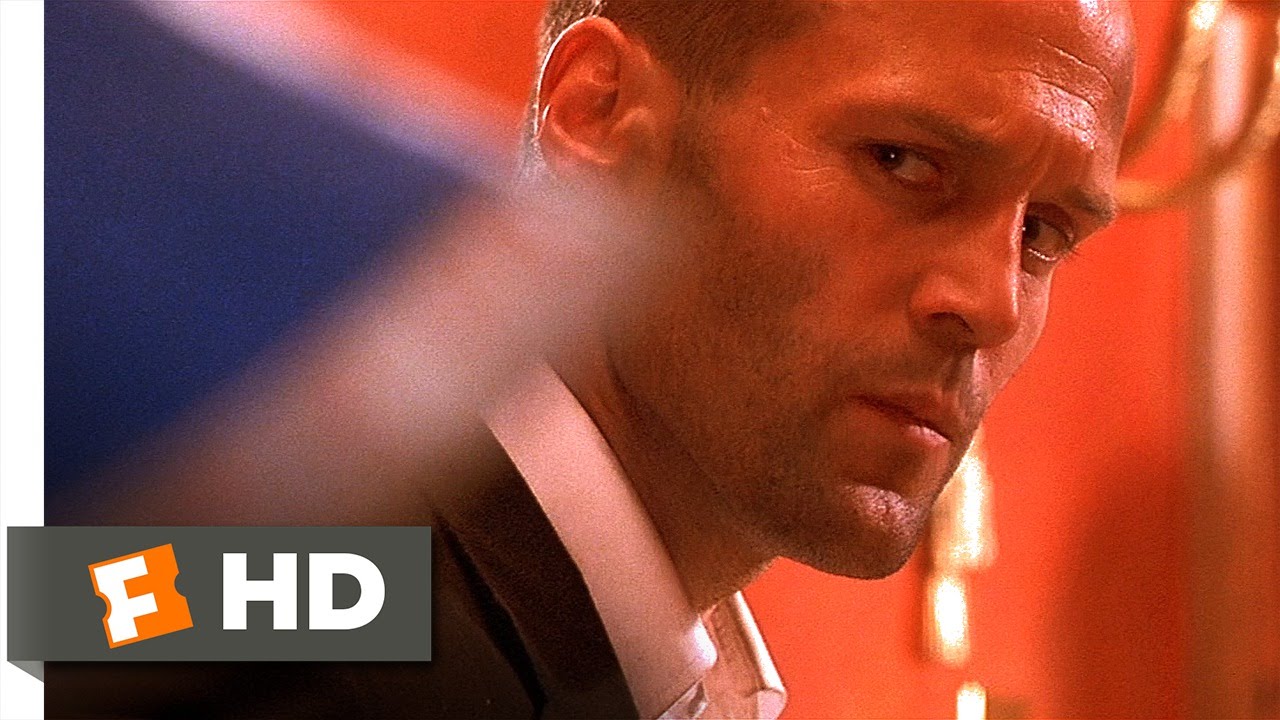 Jason Statham The Transporter
Could Clancy Brown Give the Dexter Revival the Boost It Needs?
Stuck in the Past: Movies are Comfort Food for the Soul
We Need to Talk about Bryan Cranston…
Comments