With 2011's Sucker Punch, director Zack Snyder lured me in with a steampunk-style poster and a bright, talented cast (including Emily Browning, Abbie Cornish, Jena Malone, Vanessa Hudgens and Jamie Chung). I saw it during its brief theatrical run, and was stunned by its audaciousness: it's not often you see a darkly dreamlike tale with an $82 million budget and a PG-13 rating.

The film sets the tone from the first scene: Babydoll’s (Emily Browning) mother dies, leaving the estate to her and her younger sister. Their sadistic stepfather, looking to claim the wealth for himself, kills the sister (off-camera) and has Babydoll committed to an asylum. These dialog-free minutes are shot and scored to a powerful cover of The Eurythmics’ “Sweet Dreams,” sung by Browning.

Even at this early juncture, Snyder subverts expectations for what’s to come. Browning’s performance – coupled with the director’s slick stylistic verve – makes it resonate on an unexpectedly emotional level. While some criticize Snyder's emphasis on aesthetic over feeling, I found myself invested in Babydoll’s struggle from the get-go.

Once at the asylum, we’re introduced to the seedy staff: a female psychiatrist (Carla Gugino) and a sleazy orderly (a pre-Star Wars Oscar Isaac). Babydoll quickly bonds with the other patients, establishing an escape plan that’s a cross between dissociation and the task-based goals of role-playing games. The set design becomes a green-screened clash of dreary asylum interiors and imaginative fantasy-worlds.

I quite liked Scott Glenn's “Wise Man.” While this character has no corollary in the asylum-set portion of the film, maybe he’s meant as a manifestation of Babydoll's absent birth-father. Even when in costume and providing exposition for the next “dream sequence,” Glenn carries the same authoritative persona that made his grizzled yet paternal turn in Man on Fire (1987) endearing. 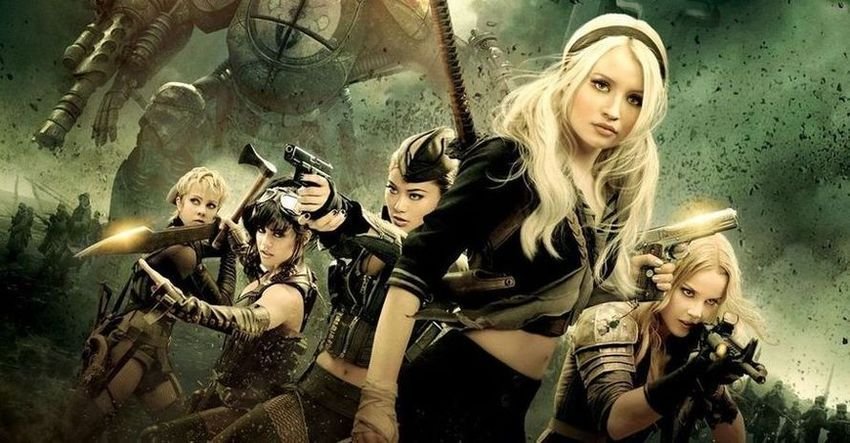 If Sucker Punch's central theme is dissociation from a hellish reality, its grandstanding action attests to the power of the cinematic experience (it played IMAX theaters upon release). Interesting how one fantasy sequence takes place in a bombed-out landscape; another favors Lord of the Rings-style dragons and castles, while the final hinges on robotic assassins aboard a futuristic train speeding toward oblivion. The aesthetic exhilaration of these passages (hampered somewhat by Snyder's fetishized slow motion) is undercut by the reality that awaits once each “task” is complete.

Whenever we return to the asylum, Snyder creates a mood similar to a '70s women-in-prison picture. Crafting a sense of female camaraderie typically reserved for something like Caged Heat seems all the more impressive when it falls under the umbrella of a PG-13 rating. While the director's other efforts fixate on surface spectacle, Sucker Punch brings subtext to the fore.

In a further ode to escapism and Snyder's own affection for the cinematic experience, the film is often edited like a music video. Unlike Michael Bay's ADHD cuts, Sucker Punch's flowing camera work creates an alternate universe of visual clarity. This is complemented by the innovative soundtrack – a collection of mash-ups, remixes, and covers of pop and punk classics that hum with the propulsive, go-for-broke energy of our determined group.

Despite the myriad interpretations of Sucker Punch and the questionable nature of its final minutes, it subsists on a sense of hope within horrible circumstances. The chemistry shared between our quintet is one of the film's key strengths. Not unlike the similarly maligned It: Chapter Two – even in its flawed moments, the rapport between the characters made me a believer.

Sucker Punch Zack Snyder
Could Clancy Brown Give the Dexter Revival the Boost It Needs?
Stuck in the Past: Movies are Comfort Food for the Soul
We Need to Talk about Bryan Cranston…
Comments