The Suicide Squad: The Rats Are Coming, the Starfish Are Here!

James Gunn started his filmmaking career writing scripts for Troma, graduated to Hollywood with the gooey sci-fi homage Slither, and rode Marvel’s Guardians of the Galaxy to box-office gold. Now, he’s crossing comic-book picket lines to deliver The Suicide Squad, his most ambitious film yet.

Alongside Birds of Prey and Wonder Woman 1984, this effort shows DC transitioning out of the dour machismo of the Snyder-verse (which, contrary to Internet opinion, need not be restored) and into a place of exuberant daring. These films have also shifted Snyder’s gun-metal-gray visual aesthetic into something I’d call “gritty colorful.”

All of the “heroes” in The Suicide Squad have their issues (poverty; the specter of overbearing parents; “millennials”; estranged children; being a cog in government bureaucracy; plain down psychopathy), but Gunn’s script makes a point of questioning whether these things can be overcome in the name of Doing The Right Thing, or if they’ll factor into the squad’s ultimate demise.

From the opening scene, Gunn throws down the gauntlet, rectifying a big issue with David Ayer’s 2016 Suicide Squad: you can’t really make good on that title with a studio-imposed PG-13 rating. Granted, Ayer’s film was a blockbuster, but one that subsisted on the bloodless slaughter of an interdimensional army of alien clones (or something). And once again, the film was ripe with the kind of shallow macho posturing that informed Snyder’s Man of Steel and Batman v Superman (not to mention most of Ayer’s other films).

Something I like about The Suicide Squad is how it’s comfortable inside its own skin. This speaks to Gunn’s horror roots, where the inexpressible can gain expression in a myriad of ways, and how that expression can engender empathy for the monster (going all the way back to The Cabinet of Dr. Caligari). By investing in his flawed – and likely doomed – protagonists, he raises the stakes to an impressive level. Truly, all bets are off on who will survive (and what will be left of them). Had Will Smith’s Deadshot reappeared here, there’s a good chance he’d find himself in pieces at some point. 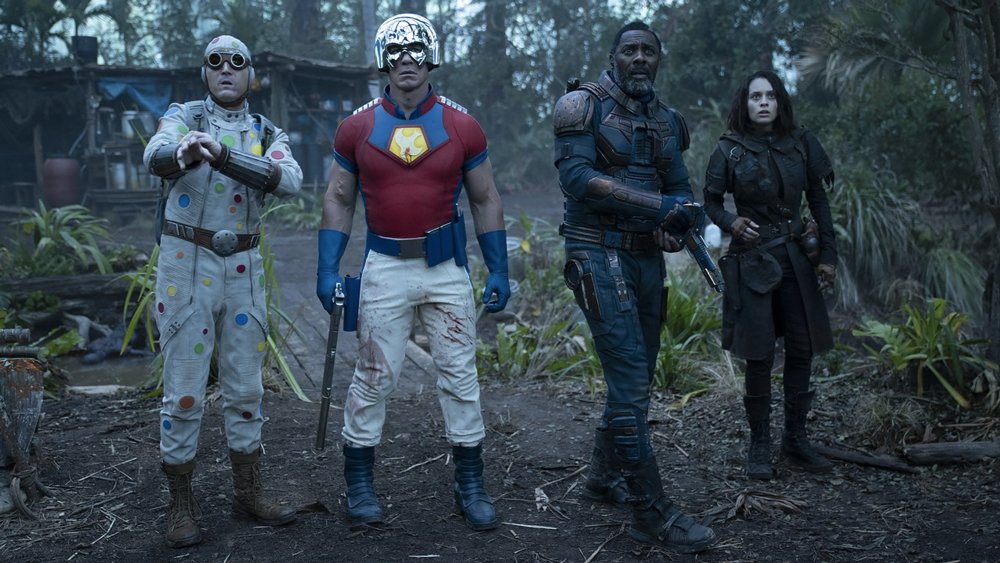 Honestly, I was a bit hesitant over how Gunn would approach these characters. Removed from context, the early teaser – with the newly-assembled squad (John Cena and Idris Elba alongside returning cast members Margot Robbie and Joel Kinnaman) bickering in a van – seemed familiar in a Guardians of the Galaxy sense. But The Suicide Squad as a whole highlights the filmmaker’s talent when it comes to handling large ensemble casts – the characters are their own unique beings, not rehashes of what’s come before.

In that regard, the performances are uniformly excellent. Perhaps more than any of his comic-book-blockbuster contemporaries, Gunn is extremely skilled in ensuring each character is well-integrated into the story and given their moments to shine. Margot Robbie continues to be a fantastic Harley Quinn (and is even given a joyously candy-colored scene of mass slaughter), but does not dominate the film.

Meanwhile, Idris Elba’s Bloodsport is a deadpan marvel – a mercenary who reluctantly assumes the leadership role (he should be the next James Bond); John Cena’s Peacemaker is a hilarious-horrific distillation of American imperialism (“I’ll kill men, women, and children to maintain peace”); character actor David Dastmalchian’s Polka-Dot Man is presented as meek, but engenders an empathy that ensures we’re never laughing at him; and King Shark (voiced by Sylvester Stallone) is another wild card who, for all his innate tendencies to tear human flesh asunder, is given a scene of quiet beauty at an aquarium.

Considering Gunn’s horror roots, it’s not surprising that The Suicide Squad contains many overt and subtle winks to the genre: there’s a knife-to-heart nod to Suspiria, and the presence of Ratcatcher 2 (Daniela Melchior) carries a distinct “Willard-cranked-to-11” vibe. Even the climactic battle, which manages to be apocalyptic and absurdly comedic, draws parallels to Godzilla…if Godzilla were a candy-colored starfish.

I found myself thinking back to Gunn’s 2010 film Super, which feels like a dry run for the hard-R/TV-MA comic-book stuff that’s saturating the market right now. Despite not being based on preexisting material, Gunn outdid himself with the tale of a common schmo (Rainn Wilson) going after criminals with a wrench and a sociopathic sidekick (Elliot Page). Over a decade ago, that film laid the foundation for the darkly comedic and ultra-violent jolts found in The Suicide Squad, and that’s a beautiful thing, indeed.

The Suicide Squad James Gunn DC
Could Clancy Brown Give the Dexter Revival the Boost It Needs?
Stuck in the Past: Movies are Comfort Food for the Soul
We Need to Talk about Bryan Cranston…
Comments