The Terror Just Off US:1: Christopher Garetano Explores the Evil Within

The Terror Just Off US:1 is the latest effort from Christopher Garetano, the creator of Strange World and Montauk Chronicles. For those who are craving a departure from the cookie cutter horror franchise fare, this short film may be the answer to your prayers.

Shot in black and white and clocking in at 9:43, this venture manages to showcase a range of depth and complexity leaving you wishing for a feature length version of the compelling story. Set in the 1950’s, we are introduced to Emma (Paige Kay) and Clarence (Khalil Boursiquot), a young African-American couple on a date.

Looking for a bit of private time with one another, the pair drive to a secluded spot. Instead of romance, the two end up with a far different outcome to their evening. What started out as a pleasant interlude will quickly turn into a harrowing and horrifying ordeal, where you are left questioning your sanity.

Garetano understands that true horror doesn’t necessarily have to be at the hands of a serial killer donning a mask or a monster from another world. In fact, humans are capable of evil intentions that make those genre conventions tame by comparison. 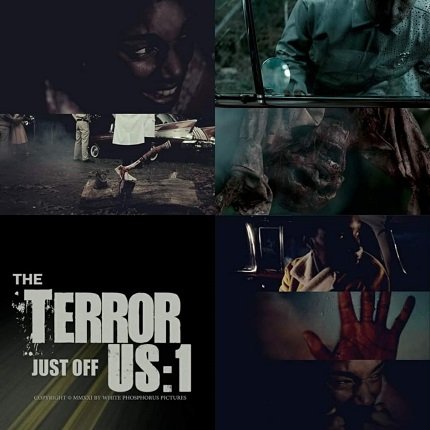 What happens to his two main characters, while set in the not so distant past, could actually be a major headline today which makes The Terror Just Off US:1 even more frightening. For Garetano, less is more. His clever usage of audio, in lieu of outright carnage and mayhem, allows the audience to arrive at their own interpretation of what happens to Emma and Clarence on that fateful night.

Sometimes what your mind conjures up can be more powerful than actually witnessing an act of gore-filled violence. As a director, taking a cue from George A. Romero’s Night of the Living Dead, Garetano is masterful at subtext.

Yes, there is some disturbing imagery that will linger in your mind long after you watch this production which is the hallmark of any well-done horror film. You can view The Terror Just Off US:1 Oct. 30 on Christopher Garetano’s White Phosphorus Pictures YouTube channel.

The Terror Just Off US:1 Christopher Garetano White Phosphorus Pictures Strange World Montauk Chronicles
Could Clancy Brown Give the Dexter Revival the Boost It Needs?
Stuck in the Past: Movies are Comfort Food for the Soul
We Need to Talk about Bryan Cranston…
Comments