Does Lockheed Martin Possess Materials from a UFO Crash? 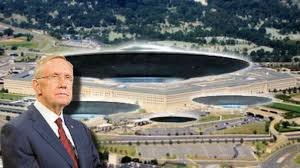 Aliens. Area 51. UFOs. Government Conspiracies. What do these things have in common?

If you guessed they’re all subjects former Nevada state Senator Harry Reid discussed with journalists at The New Yorker then you would be correct. But wait, there’s more. So much more.

Not only did former Senator Reid go ON RECORD addressing such topics, an act that would have gotten him laughed out of office a few years ago, but he said something that is truly groundbreaking: Lockheed Martin (you know, that massively large government contracting company that’s been working on secret projects in and around Area 51 since the infamous *possible* UFO crash in Roswell, New Mexico back in 1947) may have access to fragments of a crashed UFO.

Now, before you start rejoicing, we need to clarify something. Former Senator Reid did not actually see these UFO fragments with his own eyes. According to him:

“I was told for decades that Lockheed had some of this retrieved material and I tried to get, as I recall, a classified approval by the Pentagon to have me go look at the stuff. They would not approve that. I don’t know what all the numbers were, what kind of classification it was, but they would not give that to me.”

Not only did he attempt to gain clearance from the Pentagon so he could see with his own eyes whatever Lockheed Martin had in their possession, but was DENIED access to do so. They didn’t say “there’s nothing to see here.” They said “you don’t have the clearance to see this.”

Of course, that technically doesn’t mean there are actual fragments of unidentified flying objects at the location in question. But it does mean that there is *something* going on that the Pentagon didn’t want former Senator Reid to see.

However, a detailed government report is expected to be released in June that goes into greater details regarding the extent of the U.S. government’s knowledge of UFOs. So, get those “Welcome, Aliens” signs ready and stay tuned!